The Xiaomi Mi A3 begins to deliver its secrets: design, technical specifications, Xiaomi has not abandoned the recipe that has made this range one of the most popular in its catalog. If you have a limited budget to buy a smartphone with decent features, the Mi A3 will be one of the best value for money in 2019.

The Xiaomi Mi A3 will succeed the first two generations of the range. Things are starting to become clearer for the next smartphone Android One of the Chinese manufacturer. The official returns, those that will be used for its promotional campaign have been revealed by Winfuture which multiplies the leaks in recent days. This is the moment to make a point on the information about the Mi A3.

Before the images of the official rendition, the German site had raised a corner of sail on the technical sheet of the Xiaomi Mi A3. Like its two predecessors, it will be powered by Android One, the version of Google's OS with no overlay and that offers a pure Android experience. This is one of the ingredients that contributed to the popularity of this line. The smartphone is announced as the international variant of Xiaomi CC9 recently formalized in China.

It is expected to discover a Snapdragon 710 processor supported by 6 GB of RAM, a triple photo sensor on the back with a main module of 48 MP and a full HD + AMOLED screen. The Xiaomi Mi A3 will also have a fingerprint sensor under the screen. As usual, the model will be accompanied by a Mi A3 Lite whose characteristics are the same as those of the Xiaomi Mi CC9e. Under the hood, we would find including a SoC Snapdragon 665 with 4 to 6 GB of RAM, but also 64 and 128 GB of expandable storage for both smartphones.

As for the design of the Xiaomi Mi A3, it is identical to that of the Mi CC9. At the back, we find the same texture and fluorescent appearance. Same observation on the front: screen, notch ... the two models share an identical design, especially for the blue variant.

Xiaomi teased the presentation of new Android One smartphones on July 18, 2019, next Thursday. Unless surprise, the Xiaomi Mi A3 and Mi A3 Lite should be formalized on this date. Prices are not yet known. They should however be below 337,94 $ as for the Mi A2. 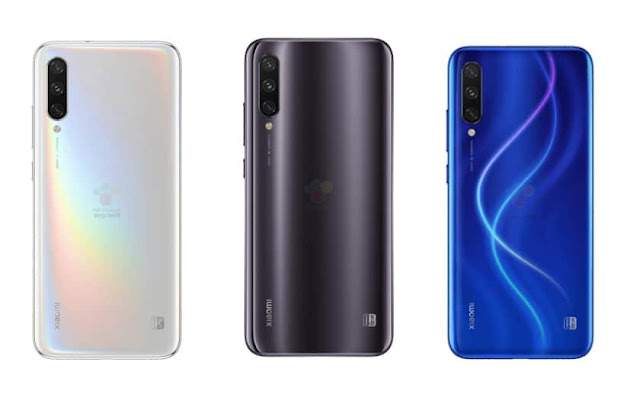