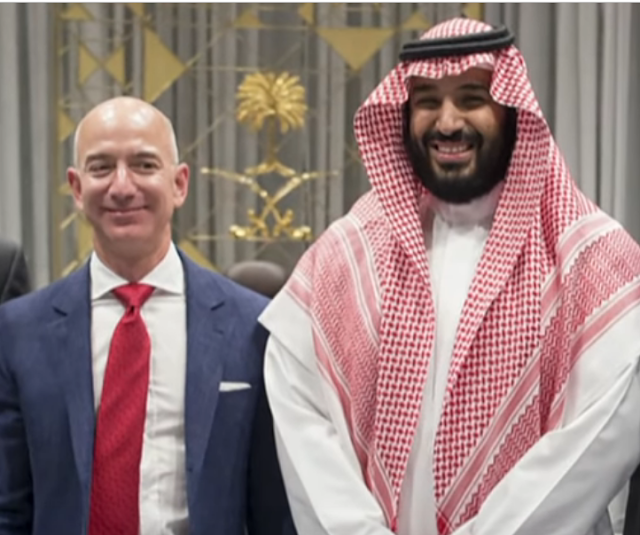 In an investigation, UN experts suspect Saudi Arabia of hacking the phone of Amazon boss Jeff Bezos via its WhatsApp messaging. The kingdom may have acted in retaliation for articles in the Washington Post, a press headline which Jeff Bezos also owns.

An unlikely scenario. A virus implanted in Jeff Bezos' mobile phone by the Saudi crown prince himself, to take revenge on the founder of Amazon: this is the path evoked Wednesday January 24 by UN investigators, who demand that justice seizes the file.

The revelation was made through an unexpected channel, that of two UN experts, based in Geneva, having had access to information "which suggests the possible implication" of the Saudi prince Mohammed bin Salman in the operation.

The shadow of Jamal Khashoggi

Almost a year ago, Jeff Bezos implicated Saudi Arabia after the weekly scandalous National Enquirer published passionate text messages between the CEO of Amazon, who was still married, and his mistress.

In a language sometimes encrypted, the richest man in the world implied that the owner of the National Enquirer, American Media Inc (AMI), would have attacked him with the complicity of the Saudi authorities.

At the origin of this assembly, the anger of the Kingdom against the articles of the Saudi journalist Jamal Khashoggi, critics of the mode and published in the Washington Post, of which Jeff Bezos is owner.

Analysis of Jeff Bezos' telephone, which was accessed by Agnes Callamard, rapporteur on extrajudicial executions, and David Kaye, rapporteur on freedom of expression, suggests, according to them, the direct involvement of "MBS" in the case.

In May 2018, the crown prince, who had exchanged his number with the founder of Amazon a few weeks earlier, sent, via the WhatsApp application, a file likely containing a virus, according to the survey.

Significant amounts of data were then extracted from the smartphone, probably using software, the model of which is regularly used by Saudi intelligence services.

In March, an investigator hired by Jeff Bezos concluded that there was a link between the alleged hacking of the telephone, which he already attributed to the Saudis, and the text messages and photos which would have ended up in the possession of the National Enquirer.

Far from playing the discretion, the crown prince would then have sent to the richest man in the world several messages containing "private and confidential information on the private life of Jeff Bezos, which were not publicly accessible", according to the two United Nations rapporteurs.

Communications made between November 2018 and February 2019, that is, after the murder of Jamal Khashoggi, on October 2, 2018 at the Saudi consulate in Istanbul, indicate the investigators, who note that the Washington Post had published several articles of investigation on the crown prince .


The alleged piracy "requires an immediate investigation by the United States and other competent authorities," said the experts, who are mandated by the United Nations Human Rights Council but do not speak for UN.

They request that the investigation relate in particular to "the direct and personal involvement of the crown prince in the efforts to target the alleged opponents".

Calling the allegations "absurd," the Saudi Arabian embassy in Washington also called for an investigation "to shed light on these facts."

"We are aware of the information published in the media and we are concerned by these allegations," reacted to AFP an official of the American State Department.

According to UN rapporteurs, the case "reinforces reports of a targeted surveillance program of those perceived to be opponents and of those of strategic importance" in the eyes of Riyadh.

In December, a Saudi court exonerated the entourage of Mohammed bin Salman from all responsibility for the murder of Jamal Khashoggi, a verdict widely decried as a travesty of justice in the world, with the exception of Washington.